Karachi (News Desk) Ejaz Aslam is one of the famous actors of Pakistan, he is known in the industry because of his lively acting. He has recently made many revelations about actress Urva Hussain. Participated in the TV show ‘The Couple Show’ with his wife

Talking about Urva Hussain on the show, the actor said, “I have no personal experience working with her, but I have heard from people in the industry and my friends about her. She loses her temper and is very angry. She is also often angry with her director. ” He also told about the meeting with her at the Touch Button promotion event and said that “meeting Urva Hussain made her feel that she is going to have an affair”. The cast of the film includes Farhan Saeed, Iman Ali, Sonia Hussain and Feroz Khan. Keep coming 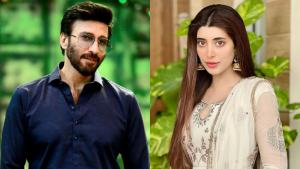 No posts to display

What did the girl do for Atif Aslam’s concert? You will be surprised...

Leading Pakistani actors also participate in PTI’s long march, but who are they? ...

VNN is universal news magazine about technology, laptops, mobiles, fashion and everything that you want.