Watch Ram Charan, wife Upasana swim in icy water, goof around at airport on vacation ahead of RRR release 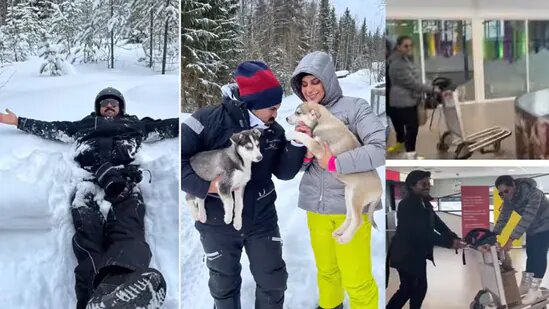 Ram Charan shared a video from his recent vacation with wife Upasana Konidela, showing how they had a blast on the trip.

Actor Ram Charan, who has just returned from a brief holiday with his wife Upasana Konidela, took to Instagram to share a video which gives a glimpse into all the fun the couple had on their getaway. Sharing the video, Ram Charan wrote that after having rested and rejuvenated, he’s now ready for RRR promotions. SS Rajamouli directed RRR, which also stars Jr. NTR along with Alia Bhatt and Ajay Devgn, will release in cinemas on March 25. Also read: RRR song Sholay: Alia Bhatt, Ram Charan and Jr NTR pay tributes to national heroes. Watch

Ram Charan and Upasana took off for a holiday a week ago. It is still unknown where they went to unwind.

From goofing around at the airport to swimming in ice cold water and playing in snow, it looks like Ram Charan and Upasana had a blast on the trip. They were probably joined by a few friends as well on the trip.