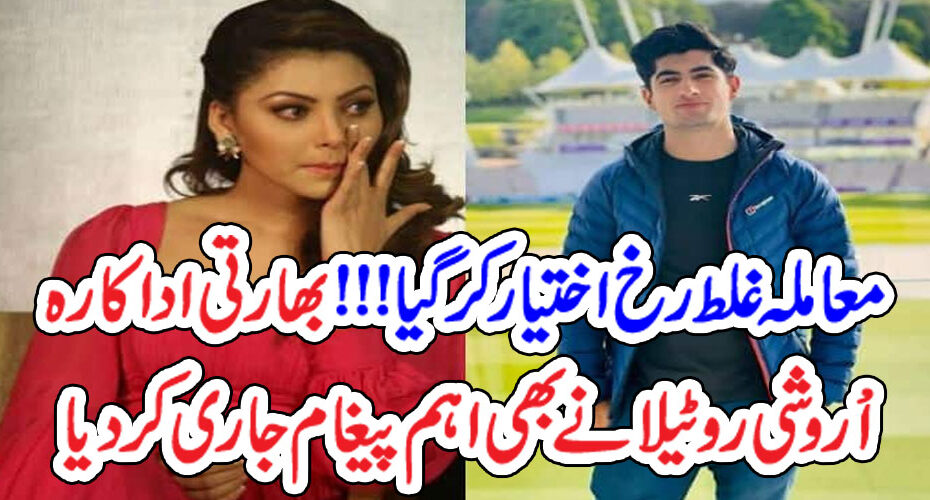 Mumbai (News Desk) Indian model, dancer and actress Urushi Rotila has said that the issue of sharing Pakistani cricketer Naseem Shah’s video on her Instagram story has taken a wrong turn. The edited video of Naseem Shah during the Asia Cup match between Pakistan and India was shared in the story, on which the actress became news.

In the video shared by Rotila, Naseem Shah was shown smiling at the cricket ground, while in the same video, the actress herself was seen looking at the Pakistani team in surprise. In the said match, Pakistan defeated India, but More than the match, the news of Urushi Rotila sharing a video of Naseem Shah smiling went viral and people made various comments on it that in the future another woman from India will marry a Pakistani boy. The said video went viral. After that, a lot of news was published and aired in the Pakistani and Indian media, on which Urushi Rotila said a few days ago that she did not share the video herself on Instagram, but her team shared the video and they It was not known who were the people in the videos shared on his account? Now, once again, while talking to journalists on the same issue in Dubai, he has said that the videos shared by his team are his. They were sent by fans. He said that neither he nor his team knew who made the videos and sent them. However, he is her fan and he works so hard to send her videos, so she appreciates him and shares those videos on her social media. What will they say when it goes viral? They replied that the matter of the above video has gone out of zone, that is, it has taken another direction or its meaning has been taken wrongly.

previousWhy did actress Megha’s mother tie her to a cot and sleep in her childhood? Shocking revelation
nextDaraya Ravi incident: Actress Resham admitted her mistake
We use cookies on our website to give you the most relevant experience by remembering your preferences and repeat visits. By clicking “Accept All”, you consent to the use of ALL the cookies. However, you may visit "Cookie Settings" to provide a controlled consent.
Cookie SettingsAccept All
Manage consent