“How will mothers feel when they have ready-made babies through surrogacy?” A new controversy has arisen over the statement of Bengali writer Taslima Nasreen 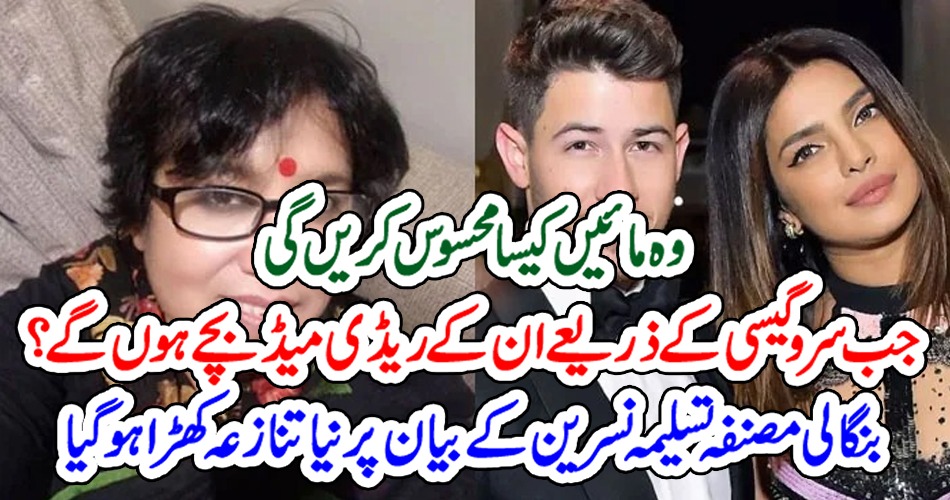 Mumbai: (Web Desk) Bengali writer Taslima Nasreen had recently tweeted about surrogacy, which has now sparked controversy. Since the post came out on social media, it has been speculated that Taslimi Nasreen did this tweet keeping in mind Bollywood actress Priyanka Chopra and Hollywood singer Nick Jones. At the same time, this post of Taslima Nasreen started going viral.

In such a situation, there was a lot of discussion on surrogacy. Writer Taslima Nasreen, on the other hand, questioned the surrogacy and its method in her post. He also questioned the feelings of the parents of the child born of surrogacy but Taslima Nasreen did not mention Priyanka and Nick Jones in her post. In such a situation, people started linking Taslima Nasreen’s tweet with Nick Priyanka’s surrogacy. After which his comment was criticized. However, now Taslima has cleared her post. Taslima Nasreen said, “My surrogacy tweets are all open to my own surrogacy. It has nothing to do with Priyanka Chopra and Nick Jones. I really like this couple. ‘ “For many surrogacy supporters this is a ‘personal choice’, but they do not support any ‘personal opinion’ if that opinion is critical of surrogacy,” he added. Some dissatisfied people have blocked my Twitter handle. In fact, they do not support any personality, they support total arrogance. “Taslima Nasreen tweeted,” How will those mothers feel when they have ready-made children through surrogacy? Will they have the same feelings for this child as the mothers who gave birth to the child? Surrogacy is possible because of poor women. Rich people are selfish. If you want to raise a child, adopt a homeless person. Newborns should inherit their merits. It’s just selfish. “