Senior Pakistani politician Nabeel Gabol announced marriage proposal to which Pakistani actress? You too may be surprised to hear 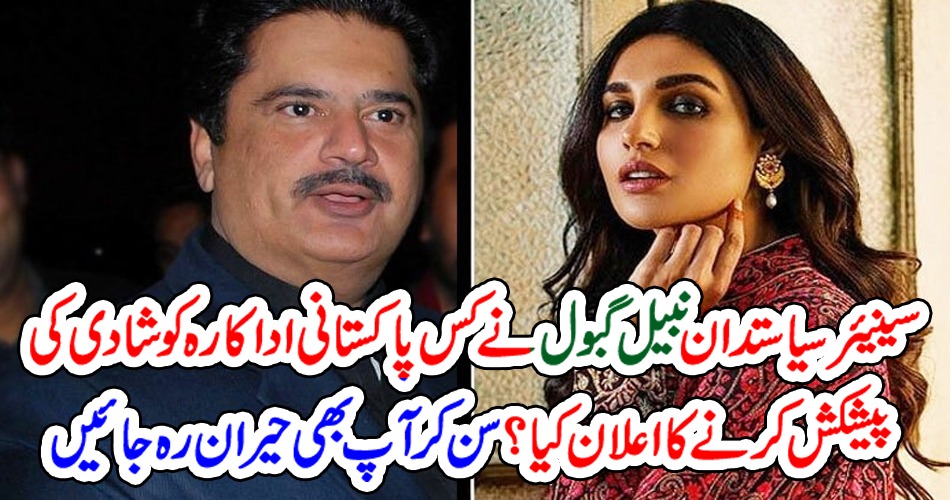 Lahore: (Web Desk) Pakistan Peoples Party (PPP) leader and senior politician Nabeel Gabol has said that it is quite possible that if he offers marriage to Amna Elias, then send another relationship to the actress. Nabil Gabol and Amna Ilyas participated in the private TV program ‘Jashan Cricket’, where they participated in different segments and answered questions.

Answering questions, Nabil Gabol said that Nawaz Sharif was taken out on wrong decision while Shahbaz Sharif is the best actor and Bilawal Bhutto is the best politician from Maryam Nawaz. During the said segment, Nabil Gabol admitted that joining Muttahida Qaumi Movement (MQM) Pakistan was his wrong decision while also admitting that his victory in the National Assembly seat from Azizabad area of ​​Karachi was fake. The program also featured pictures of a 2015 TV show in which Nabil Gabol made an offer to Reham Khan. In the same program, Amna Elias, while answering the questions, admitted that there is kinship in the showbiz industry while now the condition of white color for successful heroin is gradually disappearing. The actress also said in response to a question that Bilal Bhutto is a better politician than PML-N vice president Maryam Nawaz while he also termed all politicians including Imran Khan as corrupt. In the same program, the host reminded Nabil Gabol that he had offered marriage to Reham Khan in a Geo program a few years back, shortly after which he married Prime Minister Imran Khan. Now they are once again talking about the meaning of marriage in the program, what does it mean? Laughing at the host’s question, Nabil Gabol asked Amna Elias if she wanted to be the first lady or if she wanted to go for a higher post. To which the actress did not reply and she kept smiling. During the same discussion, Nabil Gabol addressing Amna Ilyas said that it is quite possible that if they offer him marriage then another actress will offer him marriage. He cited Reham Khan’s marriage proposal as an example in the past and said that it is possible that this time it will be with Amna Elias. In reply to Nabil Gabol, the actress smiled and said that the politician has opened social service. In the same program, Nabil Gabol also said that Bilawal Bhutto Zardari will get married first, after which he will become the Prime Minister.

Like Loading...
Tags:AnnouncedPoliticianSenior
previousSo much love and that too from him … !!! Fans were shocked to see Alize Shah’s new video
nextAfter the court decision, my mother made a big offer to Atiq-ur-Rehman
%d bloggers like this: