“Stay away from Kareena” Why did Akshay Kumar give this advice to Saif Ali Khan before marriage? Kareena Kapoor’s interesting revelation 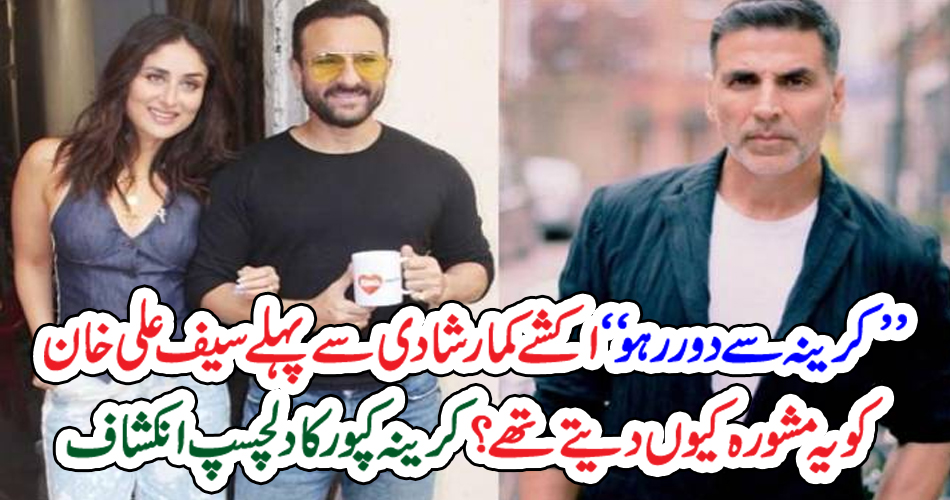 Mumbai (Web Desk) Bollywood superstar Kareena Kapoor has revealed that before her marriage, Akshay Kumar had threatened Saif Ali Khan that she was a dangerous girl. Recorded her interview, during which she answered interesting questions, the actress said

Tell us things about your husband Saif Ali Khan and Akshay Kumar that no one knew about till now. He said that Akshay took Saif Ali Khan to the edge of the film set and warned Saif that listen, be careful, Kareena is a dangerous girl belonging to a dangerous family. That Akshay Kumar scared my husband and also said that you are on the wrong path. In reply Saif said no, no I don’t know how to do it. Remember that beautiful Bollywood couple Kareena Kapoor and Saif Ali Khan The couple got married in 2012 and today they have two sons, Timur Ali Khan and Jahangir Ali Khan.

Like Loading...
Tags:AkshaybeforeKumar
previousActress Arfi Javed’s pointless dance on ‘Kacha Badam’ !!!
nextHSY Over The Moon! Pakistani Designer Hassan Sheheryar Yasin’s Work Featured In Vogue Magazine
We use cookies on our website to give you the most relevant experience by remembering your preferences and repeat visits. By clicking “Accept All”, you consent to the use of ALL the cookies. However, you may visit "Cookie Settings" to provide a controlled consent.
Cookie SettingsAccept All
Manage consent