What kind of clothes did the actress Hira Mani wear in the morning show ?? Fans hurled criticism 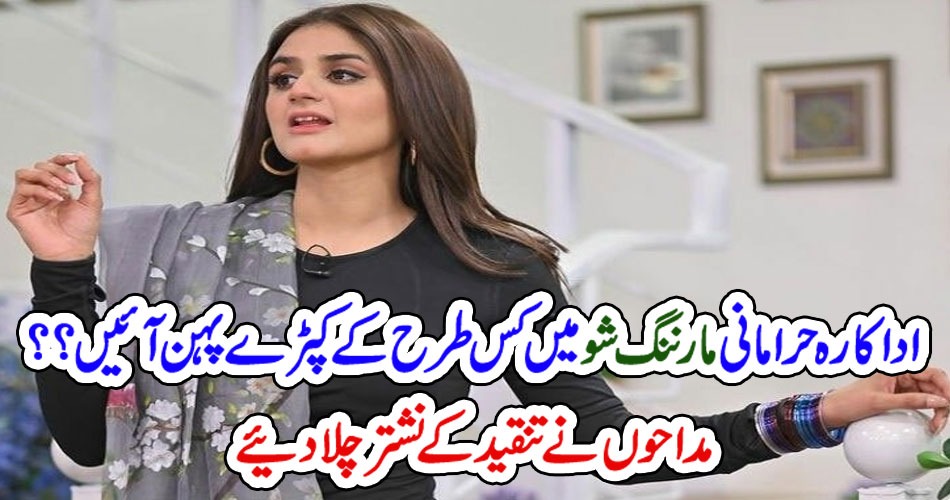 Lahore: (Web Desk) New trends and styles are being introduced in the showbiz and fashion industry every day, but recently actress Hira Mani is being criticized for attending the program wearing a T-shirt with saree. ۔ Hira Mani participated in Nada Yasir’s morning show along with co-stars Muneeb Butt and Aiza Awan to promote her upcoming drama ‘Yeh Nahi Thi Hamari Qasmat’.

Her drama ‘This Wasn’t Our Destiny’ is being aired on ARY, in which she is seen playing the role of Muneeb Butt’s wife. This was not our destiny. The story was written by Seema Munaf while it was directed by Syed Ali Razi Osama. In order to promote the play, Hira Mani participated in the morning show with a unique style but people did not like her style and criticized her. Hira Mani participated in the program wearing a black T-shirt with a sari and she also shared the photos of the said dress on her Instagram. Hira Mani while sharing the photos said that the said unique saree has been offered for sale by ‘Parnian Bai Ayesha Jawad’. Hira Mani’s T-shirt and saree were also shared on the fashion house’s Instagram, including the TV channel’s Instagram, where people criticized the actress while making comments. People commented that Hira Mani doesn’t understand how to dress, she can wear any kind of dress anytime. Some people wrote that who wears T-shirt with saree? At the same time, some people called Hira Mani insane. However, while people criticized the actress for her fashion and dress, some people praised her style and called her beautiful. Even before wearing sarees and T-shirts, Hira Mani has been criticized for her style, dress and performances. Apart from them, other showbiz personalities and especially actresses have been facing criticism for their dress and fashion.

Like Loading...
Tags:Clotheshurled
previousMQM Founder Altaf Hussain Happily Greets Hareem Shah Outside Court In London
nextBollywood actor Farhan Akhtar’s wedding date has come to light, who is the girl? You too will be amazed to know
%d bloggers like this: