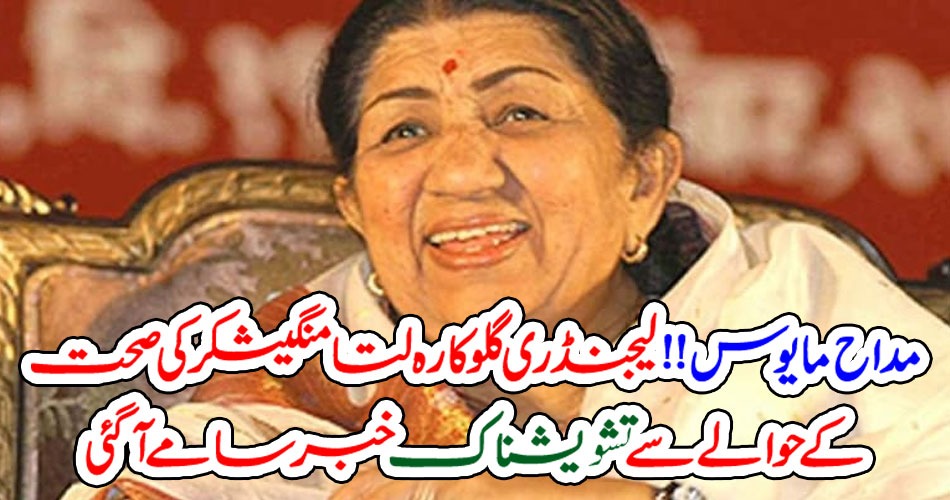 Lahore: (Web Desk) Legendary Indian singer Lata Mangeshkar, 92, was once again in critical condition and was shifted to Vanity Fair again a week later. Lata Mangeshkar contracted corona on January 8 last month and had pneumonia and has been in hospital ever since.

He was kept on the ventilator in the Intensive Care Unit (ICU) in critical condition for about 20 days, but after his health improved last week, he was removed from the ventilator and placed on oxygen. But now, once again, his health has deteriorated and he has been shifted to a ventilator. The Indian Express quoted Dr Pratt Samdani of Breach Hospital in Mumbai as saying that Lata Mangeshwar was shifted to Vanity Liter again on February 5 and her health suddenly became critical. According to doctors, Lata Mangeshkar was taken out of the ventilator last week and kept in the ICU but then her health suddenly deteriorated. In this regard, Hindustan Times also reported that due to ill health, the legendary singer was shifted to Vanity Fair again. Last week, Maharashtra Health Minister Rajesh Tope had said that legendary singer Lata Mangeshkar, 92, had recovered from corona and pneumonia 21 days later. Lata Mangeshkar’s family later confirmed that the legendary singer had recovered and was removed from the ventilator, but also said that the singer would remain in the ICU for several more days. Now she has been transferred to the ICU’s ventilator again, however, it was not immediately clear whether the singer is still suffering from corona or not.

Lata Mangeshkar has a long history of respiratory problems due to old age and has been admitted to the hospital in the past due to difficulty in breathing. Even in the year 2019, Lata Mangeshkar was undergoing treatment in the hospital for one month due to respiratory problems. Still, the doctors had already clarified that she could be kept in the hospital for several days due to her poor age. While special prayers are being offered for Lata Mangeshkar’s complete recovery across India, special prayers and supplications are also being arranged for her at temples and other religious places. Family members and doctors also expressed outrage over the news of his health, while Union Minister Smriti Irani also appealed to the people not to spread false news about him. The legendary singer has been suffering from respiratory problems for a long time. She was also kept in hospital for a month in December 2019 due to respiratory problems. Lata Mangeshkar is considered to be the most popular singer of all time in India. She is equally popular in other South Asian countries besides Pakistan. Born on September 28, 1929 in Indore, Madhya Pradesh, Lata Mangeshkar has received numerous awards, including major Indian Civil Awards, for her singing.