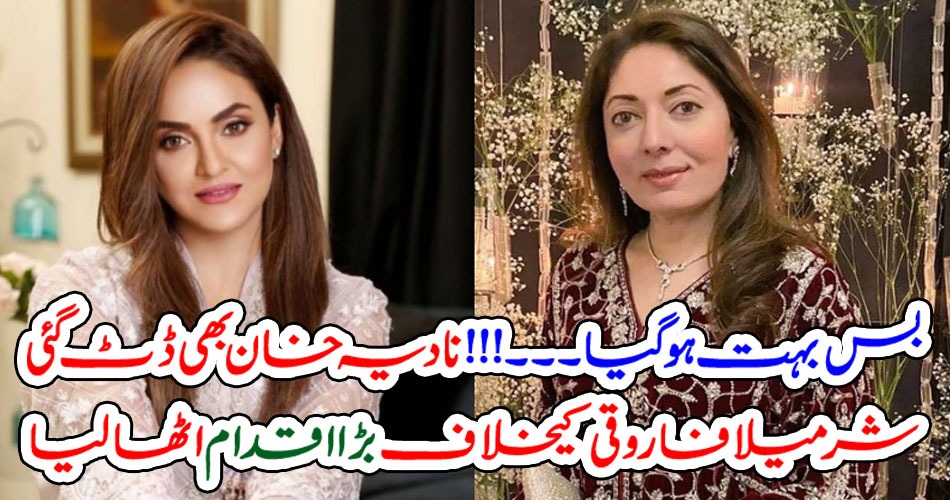 Lahore: (Web Desk) The legal battle between TV host Nadia Khan and Pakistan Peoples Party (PPP) member Sindh Assembly Sharmila Farooqi over the issue of making video has intensified. Nadia Khan sent a notice to Sharmila Farooqi to file a harassment and criminal case, including defamation suit against her for harassing her, damaging her reputation and using inappropriate words.

Nadia Khan said in an Instagram story on February 4 that Sharmila Farooqi used the agency of the Federal Ombudsman, an organization that helps women who have been harassed in the workplace. According to Nadia Khan, she was sent a notice by the federal ombudsman, which is illegal, as the agency’s job is not to hear cases of social media controversy. According to him, the post of Federal Ombudsman is held by Kashmala Tariq and the said institution is run purely by public taxes, which was misused. On the other hand, Hyde Side Magazine, while sharing a copy of the notice sent by Nadia Khan to Sharmila Farooqi on February 4, said that the TV host has also hinted to file a criminal case against the politician. Nadia Khan, through her Supreme Court lawyer, sent a five-page notice to Sharmila Farooqi asking her to apologize within 14 days and remove all content posted on social media against the TV host. The TV host told the politician in a notice that if she did not respond to his notice within 14 days and did not apologize to him, she would file a claim for Rs 500 million against Sharmila Farooqi. The notice also told the politician that the TV host would also file a criminal case against him under various provisions of the Pakistan Penal Code for inciting people against him.

In a five-page notice, Nadia Khan’s lawyer also called the TV actor a Pakistani opera and said that Sharmila Farooqi tried to tarnish the actress’ reputation. The notice also states that Nadia Khan made her TV debut with Uncle Sargam in 1993 and she first appeared in dramas in 1995. The notice also mentions various awards won by Nadia Khan. He stopped the rhetoric and called the TV host. Earlier on January 29, Sharmila Farqi had sent a legal notice to Nadia Khan seeking Rs 5 crore in damages. After which Nadia Khan had announced that she was sending a notice of Rs 500 million to Sharmila Farooqi and now she has sent a notice to the politician. Sharmila Farooqi had also lodged a complaint against Nadia Khan with the Federal Investigation Agency (FIA) on January 19, 2022. Sharmila Farooqi had lodged a complaint with the FIA ​​against Nadia Khan at the time and initiated legal action against the host, when a short video with the actress’ mother of a politician went viral in January last year. In the viral video, Nadia Khan was asked by Sharmila Farooqi’s elderly mother about make-up, clothes and jewelery, but the host’s style was ridiculous, which led to her being criticized. The two women have now sent notices to each other on the issue and the legal battle between the two is intensifying.

Like Loading...
Tags:againstenoughFarooqiSharmilastood
previousFans disappointed !! Legendary singer Lata Mangeshkar’s health has come under alarming news
nextPTI now past !!!! Which new party did Hira Mani join? You too will be stunned to hear
%d bloggers like this: