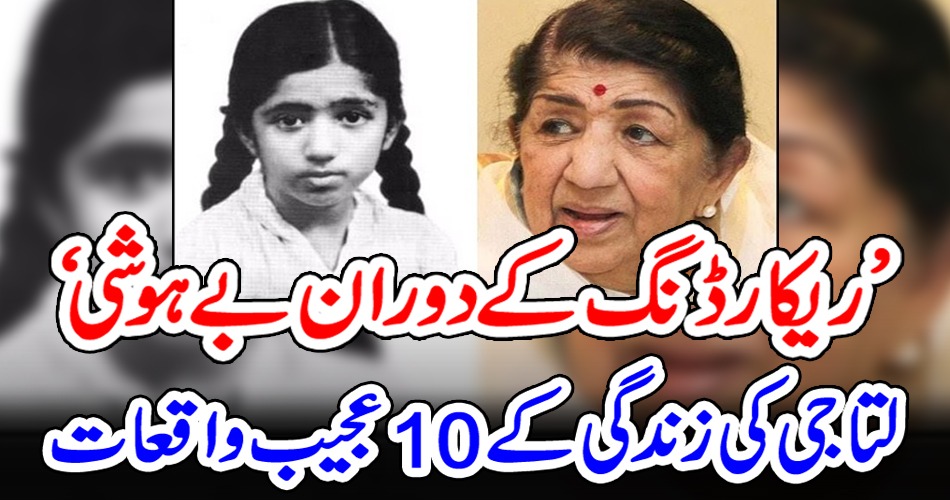 Lahore (Web Desk) Lata Mangeshkar, who touched millions of hearts thanks to her melodious voice and simple personality, has passed away today, leaving the music fans in mourning. At present, various reports are being broadcast in the media regarding his life and art

However, there are some things about his life that very few people know. Family of Performer Marzita Mangeshkar was born in an artist family, her father ran a theater company. This is how art and music got Lata Mangeshkar in the ghat. They grow up in such an environment. Many years ago, he had said in an interview that his father was telling the student about Riyadh of Raga while she was playing nearby. His daughter has artistic talents. When the first song was removed from the film, Gayalta Mangeshkar recorded the first song for a Marathi film called ‘Kati Hassal’ in 1942, which had the lyrics ‘Nachun Ya Gide Kheloon’, this song. He recorded it with great effort but when the film was released it did not include this song. During the recording, Lata Mangeshkar narrated the incident that while recording the song of musician Nowshad, it became a strange situation. It was a hot summer afternoon. In those days, recording studios did not even have air conditioners, while the ceiling fans were turned off during the final recording. It was a difficult song, which had been recorded for more than half but then suddenly I fainted. If he had listened to it half a time, he would have made hundreds of mistakes in his own singing. Were He expressed these views in a program called ‘Tere Sur Aur Mere Geet’. He further said that the relationship between me and Madan Mohan was more than a relationship between a singer and a musician, but it was a sibling relationship. Lata also became a GMP and was a member of Rajya Sabha from 1999 to 2003. He was nominated for the post in 1999. She called it an unpleasant event in her life and said that she did not want to be an MP. Outside India, she was not just an Indian legend. Fans of her beautiful voice are found all over the world. She is also the first Indian to perform at the Royal Albert Hall in London. The French government awarded her the Legion of Honor in 2007, the country’s highest civilian award.