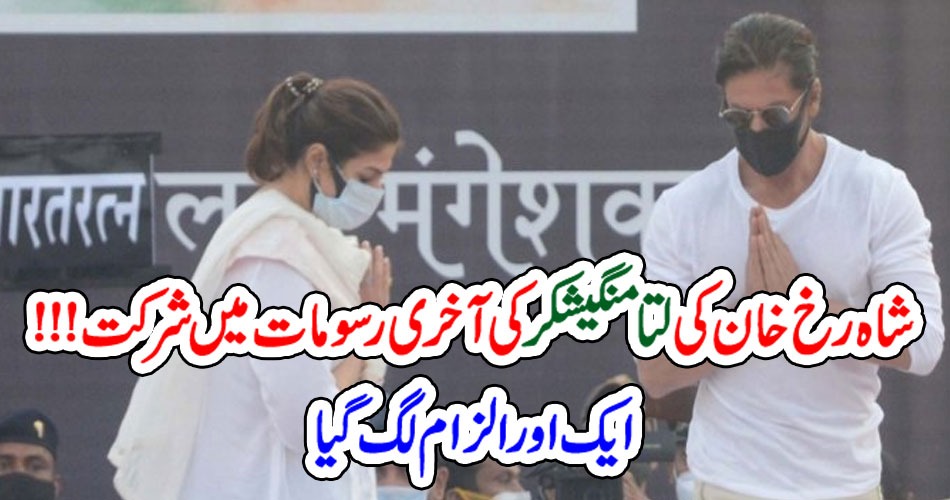 Lahore: (Web Desk) Legendary singer of India Lata Mangeshkar’s last rites were attended by prominent personalities of the country including Prime Minister Narendra Modi. Shah Rukh Khan, along with other Bollywood celebrities, attended the last rites on Sunday. In a video clip that went viral on social media, actor Lata Mangeshkar, known as the king of Bollywood, was seen reading something and blowing on her body.

But supporters of right-wing parties in India are accusing Shah Rukh Khan of spitting on Lata Mangeshkar’s body. Earn Yadav, who is affiliated with India’s ruling Bharatiya Janata Party, shared a video of Shah Rukh Khan and asked, “Did he spit? A user named Chero Bhatt also shared the video and spat on Lata Mangeshkar’s body on Shah Rukh Khan.” Accused of However, other social media users are telling critics of Shah Rukh Khan on Twitter that the king of Bollywood was actually reading something on the body of Lata Mangeshkar. Indian TV anchor Gargi Rawat wrote in a tweet that “good deeds like praying and blowing are being misrepresented.” A user named Samina wrote that “Shah Rukh Khan is reciting dua and blowing on Lata ji’s corpse for safety and prayers in the next world.” Indian filmmaker Ashok Pandit also took the accusers of Shah Rukh Khan by surprise and wrote that they are being falsely accused of spitting. Lata Mangeshkar died in Mumbai on Sunday morning at the age of 92 after a long illness. A doctor at Breach Candy Hospital in Mumbai told the media on Sunday that he died at around 8 this morning. On the demise of Lata Mangeshkar, the Indian government has announced two days of national mourning while the flag will remain in the tunnels.

Like Loading...
Tags:AllegationanothermangeshkarParticipationrites
previous“What would happen if I made such a joke with Sarah?”, The actress warned everyone
next‘I Wouldn’t Let A Biopic Be Made On Me’ – Lata Mangeshkar’s Statement On Her Biopic
%d bloggers like this: