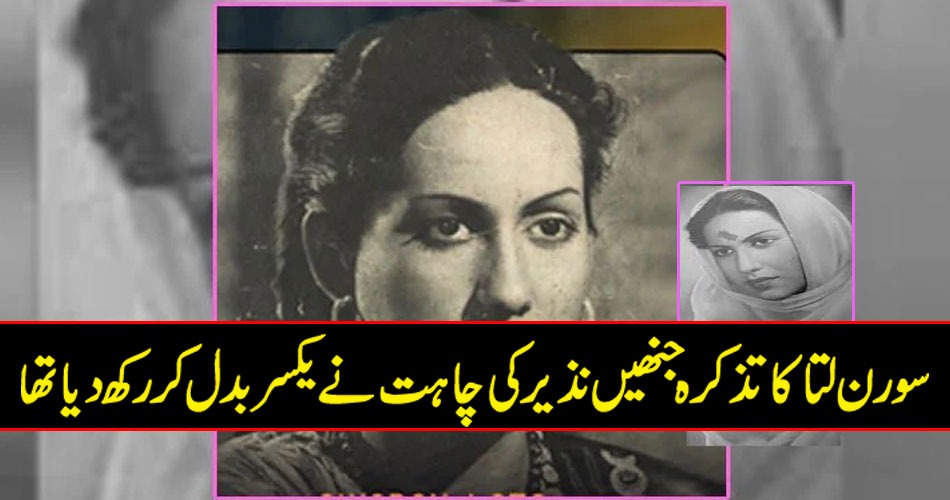 Lahore: (Web Desk) Soren Lata had converted from Sikhism to Islam. After entering the realm of Islam, her new name was changed to Saeeda Bano, but by that time, no one could forget the identity she had made in the film Nigri with the name of Soren Lata.

Saeedah Bano alias Soren Lata passed away on this day in 2008. She was a popular heroine of her time in the Indian subcontinent. Apart from film, Soren Lata made a name for herself through her services in the field of education. She herself was highly educated and conscientious and was a big supporter of educating girls. She founded Jinnah Public Girls School in Lahore and continued to serve the education sector till the end of her life. Soren Lata was born on December 20, 1924 in a Sikh family in Rawalpindi. He started his artistic career in 1942 with a secondary role in Rafiq Rizvi’s film Awaaz. In 1943, Soren Lata made her acting debut as a heroine in Najam Naqvi’s film Tasveer, starring Nazir. The next film was Laila Majnoon and in that too she appeared with actor Nazir. The film made a big difference in Soren Lata’s life and she converted to Islam and married Nazir. Their film duo was very popular and Nazir was considered a successful hero. Actor Nazir died in 1983. After her marriage to Nazir, she showed the essence of acting in films like Ronak, Ratan, Insaf, As Par and Wameek Azra. Soren Lata later co-produced the film Sachai with her husband and then popular hero Nazir. Both of them appeared in the film as heroes and heroines. In the same year, Pakistan’s first Silver Jubilee film was released. Her filmmakers, directors and heroes were Nazir and Heroin Soren Lata. Pheera got a great success and after that the couple’s Punjabi film Lare and Urdu film Anokhi Dastan were released. In 1952, Nazir directed Sharif Nayyar’s film Bhigi Palkin in which Soren Lata played the role of heroine along with Ilyas Kashmiri. In the film, Nazir played the role of a villain. In 1953, four more films of the actress, Shehri Babu, Khatun, Naukr and Heer were released. After a successful film career, Soren Lata decided to quit the industry and confine herself to the educational institution she had set up.

Like Loading...
Tags:Changedcompletelymentionnazirsoren
previous‘They Would Love To Have Her Perform In Pakistan’ – Shabana Azmi Shares Pakistanis Love For Lata Ji
nextCase for making obscene video of actors: Court issues order
%d bloggers like this: