Serious allegations against Hareem Shah’s state institutions !!! If the action does not stop, Tuck Tucker threatens 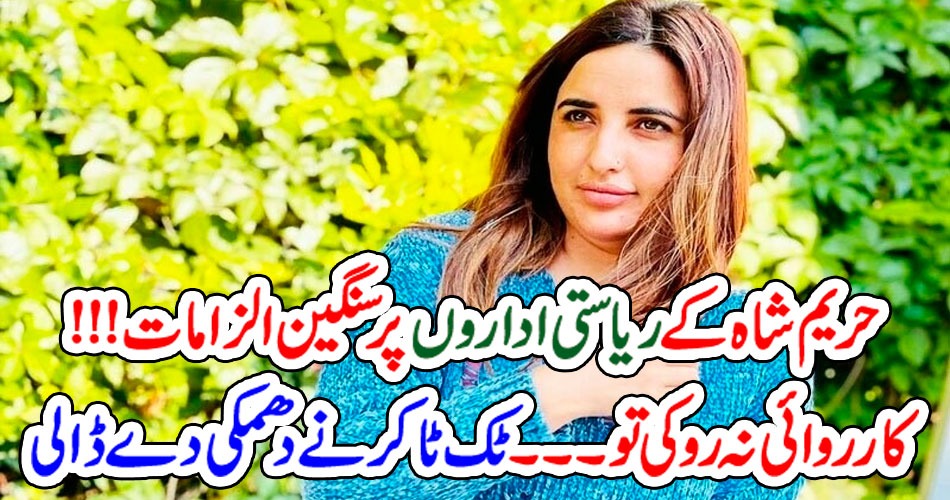 Lahore: (Web Desk) Controversial Tak Tucker Hareem Shah has leveled serious allegations against the Special Branch of Sindh Police including Federal Investigation Agency (FIA) and threatened them not to take any action against her and her husband. Otherwise she will answer them.

In an interview given to journalist Murtaza Shah in London, Hareem Shah not only used harsh language against the officers and officials of FIA and Special Branch of Sindh Police but also said inappropriate phrases for them. Hareem Shah alleged that the FIA ​​and the Special Branch are outlaws, their officers drink alcohol and take bribes. According to Tuck Tucker, the FIA ​​and the Special Branch started operations against her out of personal jealousy but now they are targeting her husband Bilawal Shah. She said that her husband is Syed and Syed never eats haraam food. He has his own property and property. Hareem Shah said that the report of Special Branch is of no importance, they make and sell reports for Rs. 3,000. Done? She also used inappropriate language against her husband Bilawal Shah without naming the top officials of both the agencies on the report of Special Branch and FIA action against him. In her video, Hareem Shah said that she only respects the Pakistan Army, because the same organization is working for the protection of the country and the nation.

He said that she only bows down to the Pakistan Army and at the same time he demanded from the Pakistan Army to take action against the agencies like FIA ​​and Special Branch and help them. It should be noted that FIA has started investigation against Hareem Shah under Money Laundering and Cyber ​​Crime Act. The FIA ​​launched an investigation into Tuck Tucker last month after he claimed in a video with thousands of pounds that he had come to the UK from Pakistan with large amounts of foreign currency and had not been stopped. After his video, FIA Sindh had announced to investigate money laundering against him. He later said that the video was a comedy, on which the FIA ​​had launched an investigation against him under the Cyber ​​Crimes Act for defaming the country and state institutions. The FIA ​​later asked the SBP to freeze the accounts of the Tuck Tuckers, after which Hareem Shah filed a petition in the Sindh High Court. Last week, Hareem Shah had said that at the request of her husband Bilawal Shah, the Sindh High Court had issued a stay order restraining the FIA ​​and SBP from taking action against her. Three days ago, it was reported that Hareem Shah’s husband Bilawal Shah was a former Sindh police employee who had been involved in extortion and bribery. Now, the actress has denied the allegations, leveled serious allegations against the state institutions and used harsh language against them.

Like Loading...
Tags:ActionagainstAllegationsInstitutionsseriousState
previousNo one stays together !!! Actress Saraha Asghar came out in support of Prime Minister Imran Khan and made a big statement
nextWATCH: Hira Mani Spills The Beans About Her Experience With Whitening Injections
%d bloggers like this: