Aamir Liaquat’s third marriage !!! Who is the girl How old is he You will be amazed to know 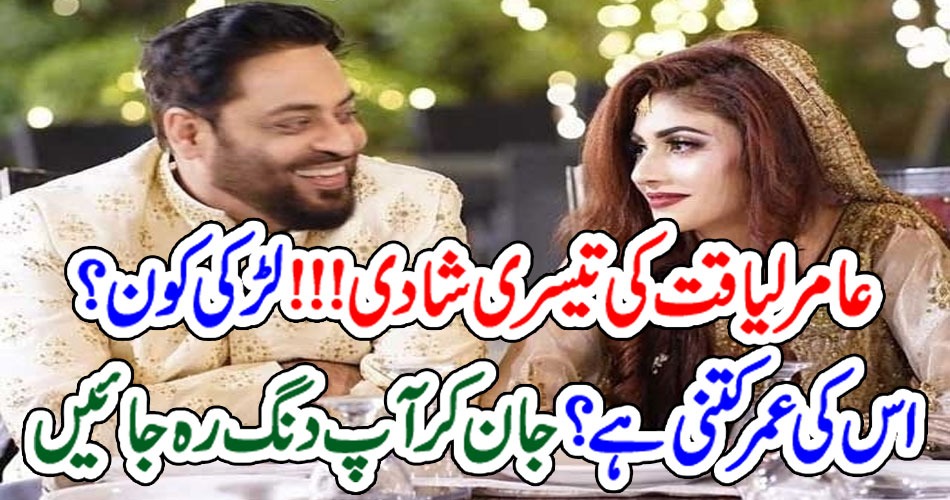 Aamir Liaquat wrote in his post that he got engaged to 18-year-old Syeda Dania Shah yesterday. In the introduction of his wife, Amir Liaqat wrote that Dania belongs to a respected Najib-ul-Tarfeen Sadat family of Lodhran. The Member National Assembly in his post praised the Seraiki family and also asked the fans to offer prayers for him and his wife. He said that he had gone through a dark tunnel of his life which was a wrong turn. On the other hand, Amir Liaquat’s third wife Dania shared a photo with her husband. Remember, the other day, his second wife Tobia’s position regarding separation from Aamir Liaquat came to the fore in which she said that I want to inform you all about the change that is coming in my life with a heavy heart. Family and close friends are aware that after 14 months of separation, it was clear that there was no hope for reconciliation and reconciliation, so I had to go to court to seek a divorce. It may be recalled that after the second marriage, Amir Liaquat’s first marriage had ended and his first wife Syeda Bushra had confirmed the divorce in December 2020. Syeda Bushra had said that after her second marriage, Amir Liaquat had divorced her, however, she did not specify when they got divorced.

Tie a knot with, Syeda Dania Shah, 18, belong to an honorable Najeeb ut Tarfain “Sadaat” Family of Lodhran, South Punjab, saraiki, lovely, charming, simple & darling.I would like to request all of my well wishers, please pray for us, I have just passed the dark tunnel, it was a wrong turn. pic.twitter.com/gO7nVO4pwj

Like Loading...
Tags:AmazedLiaquatthird
previousNo one knows their children !!! Who are the children of these famous actresses and what do they do?
nextWhy Shah Rukh Khan has not acted in any Hollywood movie till date? The reason has come to light
%d bloggers like this: