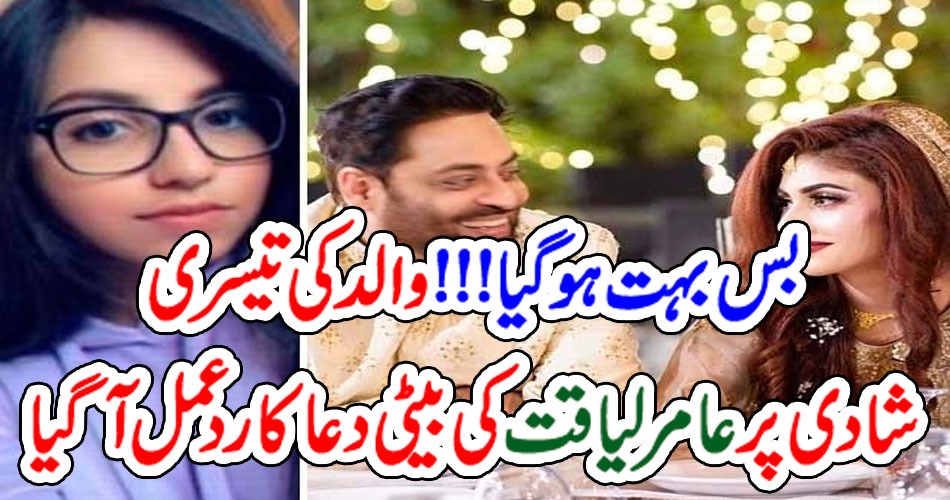 Immediately after the news was shared by Amir Liaquat, it spread like wildfire on social media. People also started asking prayers to know the reaction of their daughter on Aamir Liaquat’s third marriage and started mentioning her on posts related to Aamir Liaquat’s marriage. Fed up with people’s questions, Dua has responded to the news of her father’s third marriage. Dua Aamir asked people on Instagram Story to please stop mentioning me in posts related to my family and mentioning me in the comments. This account is for my artwork only and if you do not respect it you can gladly follow my account. Will not give It should be noted that Amir Liaquat’s first wife Dr. Bushra Iqbal has two children, a son Ahmed and a daughter Dua. After Aamir Liaquat’s second marriage to Tobia Anwar, he divorced his first wife, after which his children also live with their mother. Recently, Tobia Anwar had confirmed that she has resigned from Amir Liaquat. And just a day after this news, Aamir Liaquat had announced his third marriage yesterday.

Like Loading...
Tags:enoughLiaquatRespondedthird
previousLooking at the current situation, whether to get married or not ?? Kabra Khan started a new debate
nextWait, What! Did Alia Bhatt Just Confirm She Is Married To Ranbir Kapoor?
%d bloggers like this: