Gentlemen who want more marriages, what to do? Amir Liaqat revealed a big secret 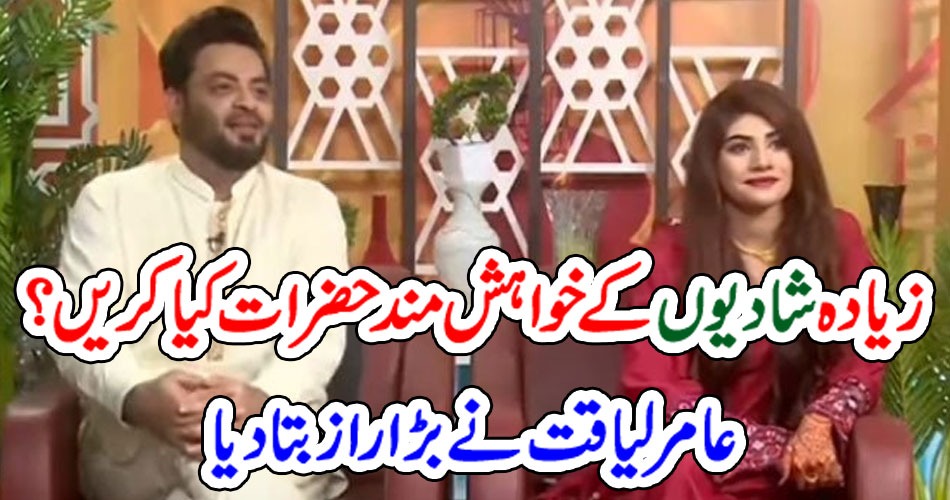 Lahore: (Web Desk) Amir Liaqat, a 49-year-old scholar and TV host who got married for the third time to Syeda Dania Shah, 18, who is 31 years younger than himself Suggested.

Aamir Liaquat had said in his social media posts on February 10 that he got married for the third time on February 9 to a girl belonging to Seraiki family of Punjab. People also criticized him for sharing. After the marriage, videos of Aamir Liaquat and his wife Dania Shah in their bedrooms and while traveling in a car went viral. The host was criticized. When the videos of Aamir Liaquat and his wife went viral, they were also criticized by other showbiz personalities including drama critic Lubna Faryal, Bilal Qureshi and Ahmad Ali Butt. Lubna Faryal had reacted to Amir Liaquat’s videos that Islam commands his wife to wear a veil from a non-mahram but the TV host’s wife’s day starts from the bedroom and ends there. Similarly, actor Ahmed Ali Butt, reacting to the video of Aamir Liaquat and his wife, wrote in his Instagram story: “When a person shares personal things from his bedroom, he should remember that he Is inviting them to interfere in their private affairs and then they should not even cry over what people say. Amir Liaquat has given a clear answer to the critics of Ahmed Ali Butt and other showbiz personalities and common people for sharing video with his wife and advised them to be patient.

Sharing a short video on Instagram, Aamir Liaquat mentioned Ahmed Ali Butt in the caption and wrote that all the burnt people including the actor should listen and watch his video. In the short video, Aamir Liaquat can be seen sitting in the car, in which he asked the critics without giving anyone’s name to give them the password of their brain, because they have installed the intellect in their brain. Aamir Liaquat closed the comments section in the explanatory video, however, his video went viral and people made all sorts of funny comments on him. On the other hand, Aamir Liaquat, in a recent interview, told the beneficiaries of repeated marriages that marriages can be done with medical treatment and not with scholarships. Amir Liaqat said that those who want to get married more should treat themselves instead of getting scholarships, because men who do not get married again and again get disease in one part of their body. Aamir Liaqat said in the video that his third wife had given him permission for the fourth marriage but he did not intend to get married again. According to the TV host, any man can have four marriages at the same time, but if someone gets divorced or his wife dies, he can have more marriages.