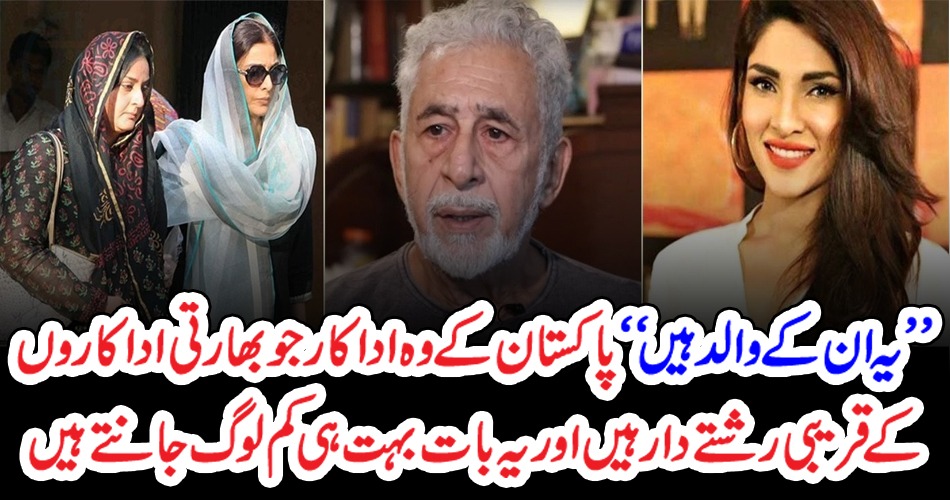 Lahore (News Desk) You must have heard most of the Pakistanis talking about their Indian relatives but there is no shortage of people in our showbiz who have relatives in India. In this article you will be introduced to celebrities whose relationships are also part of showbiz across the border. Faisal Rehman Pakistani

He started his career with films and then also showed the essence of acting in dramas. Faisal Rehman is very popular in Pakistan. Rehman’s uncle “Rehman” was a famous actor of Indian films who showed the essence of acting in such famous films as 14th Moon, Time and Thirst. Zahra Sehgal became famous as one of her characters “Aman”. Pakistani actor Syed Kamal is a cousin of famous Indian actor Naseeruddin Shah. Before his death, Kamal Sahib expressed his displeasure with Naseeruddin Shah and said, “I am very angry with Naseer because he came to Pakistan and left without meeting me. He did not have time to meet me.” King Aamir Khan is a relative of famous Pakistani singer Ali Zafar’s wife Ayesha Fazli. In this regard, Ayesha was a relative of Aamir Khan and his nephew Imran Khan. Everyone is familiar with this pair of two Bollywood sisters Few people know that Tabu and Farah’s father was a Pakistani actor. In fact, Tabu’s mother was a teacher while his father was an actor. Not being very successful in India, Tabu’s father came to Pakistan and never went to see his wife and children again. What is the name of the song of Pakistani movie “Granata”? Rozina’s rival actor Jamil is the father of Indian actors Farah and Tabu. Zia was one of the three writers who wrote the script for the popular Indian film “Mother India”.

Like Loading...
previous‘Be The Sunshine That You Are’ – Hania Amir Has A Message For Those Who Don’t Fit In
nextNiazi Hoon Par ………………………………………………………… What did Sedrah Niazi answer to the question of voting for Imran Khan? Hold your head when you hear it
%d bloggers like this: