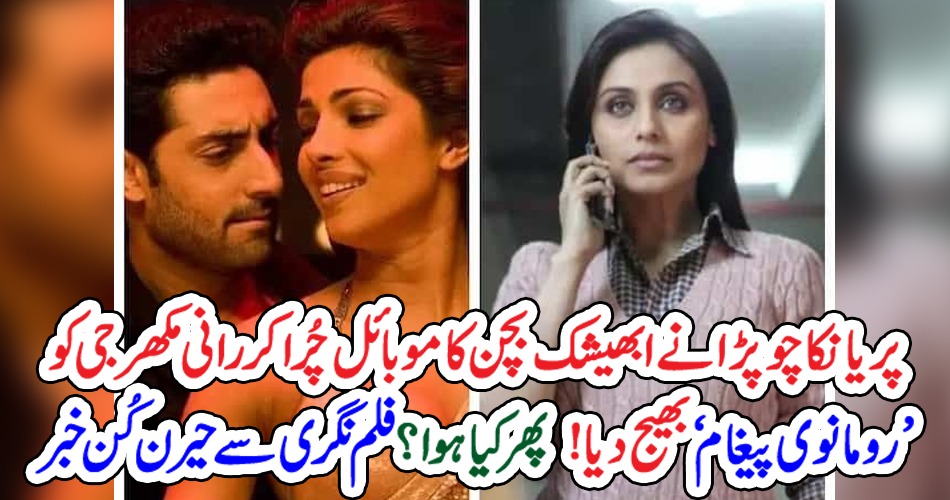 Mumbai (Web Desk) Bollywood actress Priyanka Chopra once said that she stole Abhishek Bachchan’s mobile and sent a message to Rani Mukherjee saying, “I miss you, what are you doing” and at the same time turned off Abhishek’s mobile. But what was the response of the actress? Priyanka Chopra herself is not even known but TV host Sammy Grewal said. Bollywood actress and

Leading talk show host Sammy Grewal has shared a short video of his 2006 interview with Priyanka Chopra on his Instagram account in which Priyanka Chopra talks about a very interesting incident that took place on the set of the movie “Bluff Master”. Sammy Grewal asks Priyanka, “Did you steal Abhishek Bachchan’s mobile phone?” Priyanka laughs at this question and says in surprise but first Abhishek Bachchan stole my mobile phone or not. Coin and I went crazy looking for my mobile. I knew Abhishek was behind this act but he clearly denied that he knew anything about it. Eventually Abhishek had to give my mobile as he could not sit in the van for long. Priyanka added that later Abhishek inadvertently forgot his mobile in the van, at that time and actor Ratish Deshmukh was sitting there. So I took Abhishek’s phone and mischievously texted Rani Mukherjee saying “I miss you what are you doing”? Although Ratish Deshmukh forbade me to do so but I still texted Rani. Priyanka Chopra added that I was very nervous after texting Rani Mukherjee from Abhishek Bachchan’s phone so I switched off her phone. After hiding all these details, Priyanka asked Sammy Grewal how did you find out about this incident because I did not mention it to anyone. Was Sammy says I will not tell you how I found out but I will tell you that in reply to the message you sent to Rani Mukherjee from Abhishek’s mobile, Rani asked in surprise Abhishek what happened to you? Priyanka Chopra was shocked to hear this from Grewal. Sami Grewal shared the video of the interview on Instagram and said that it was his favorite moment while interviewing Priyanka. It is believed that Priyanka Chopra had worked with Abhishek Bachchan in the movie “Bluff Master” in 2005.