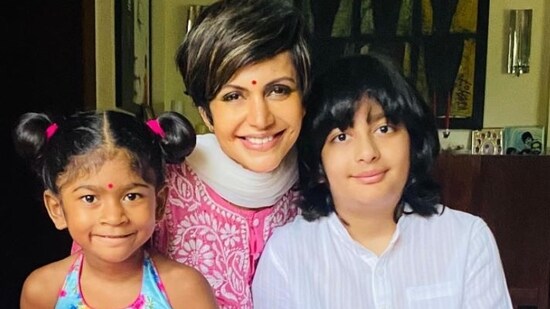 Mandira Bedi says that she would have preferred to adopt a girl child, even if her first-born were a girl. She has a ten-year-old son, Vir, and five-year-old daughter Tara whom she adopted in 2020.

Mandira Bedi has said that she might have adopted a girl child, had she had a daughter as the first child. Mandira lost her husband Raj Kaushal last year to a heart attack. Mandira and Rraj adopted four-year-old Tara in 2020. Mandira also has a ten-year-old son, Vir. (Also read: Mandira Bedi says daughter Tara ‘wasn’t denied her first birthday celebration in our home’, shares pics)

Announcing Tara’s entry into their family, Mandira had posted a family picture of herself, Raj, Vir and Tara on Instagram. In a recent interaction, the actor opened up about her decision to adopt Tara.

Mandira told ETimes, “If Tara was our first-born, I don’t know if we would have adopted a boy as our second child. In our country, there are far more girls than boys who’re seeking parents.” Talking about the names of her children, she added, “Raj and I had decided that if our first child is a son, we will call him Vir, and if it’s a daughter, we will call her Tara. So, Tara didn’t become Tara when we saw her for the first time. “

Like Loading...
previousHere’s what Prabhas has to say about ‘Baahubali 3’
nextSamantha Ruth Prabhu smiles as Varun Dhawan tells paparazzi ‘kyun dara rahe ho’, carefully walks her to her car. Watch
%d bloggers like this: