Yami posts unseen pictures with husband Aditya Dhar, wishes him on his birthday 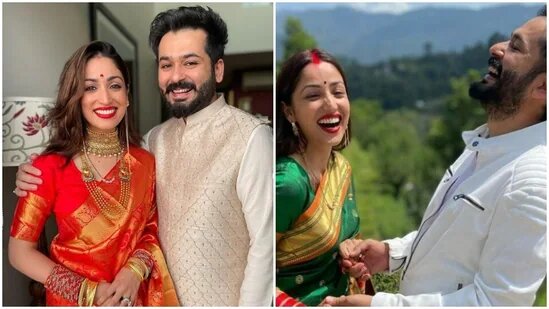 Aditya Dhar, who made his directorial debut with Uri, celebrated his 39th birthday on Saturday, March 12. His wife actor Yami Gautam shared some unseen pics of the two on social media to mark the occasion.

Yami Gautam has shared a series of unseen pictures of herself with her husband Aditya Dhar to wish him on the occasion of his 39th birthday. She took to her Instagram account to share the photographs and also wrote a sweet note for the film director. Fans reacted to the picture with red heart emojis. Also Read: Yami Gautam says there are more perks to marrying Aditya Dhar than starring in his future films

Yami wrote alongside three pictures, “Happy birthday to my love,” adding a red heart emoji. She continued, “Forever,” adding another heart emoji and a heart-eyed emoji.

The first picture showed Yami and Aditya smiling as they posed in a traditional look. Aditya, who was wearing an off-white kurta and cream jacket in the picture, had his hands placed on Yami’s shoulder. The actor was dressed in a silk saree and had completed her look with heavy jewellery including bangles, chokers, and mangalsutra. She also wore a bindi, red lipstick, and vermillion.

Like Loading...
previousWhen and how did Deepika first meet Shah Rukh Khan? The actress told
nextKareena Kapoor Khan wishes Karisma’s son Kiaan on his birthday with his and Taimur’s ‘Pizza in bed’ PIC
%d bloggers like this: