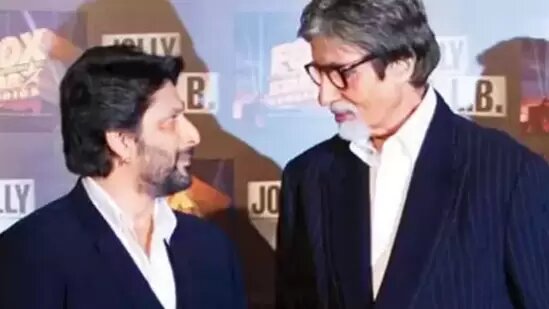 At a press conference for Bachchhan Paandey, actor Arshad Warsi said Amitabh Bachchan and director Joy Augustine introduced him to Bollywood but then later abandoned him.

Actor Arshad Warsi recently credited veteran actor Amitabh Bachchan for getting him into the acting profession, but added that after his debut, Amitabh and his company ‘abandoned’ him. Arshad’s debut film Tere Mere Sapne was produced by Amitabh Bachchan’s company ABCL and directed by Joy Augustine. Prior to his acting debut, Arshad had worked as an assistant director and choreographer in a few films. (Also read: Akshay Kumar speaks about rumoured rift with Arshad Warsi, calls it ‘baseless’)

Arshad spoke about his debut film and Amitabh’s role in his career during the promotions of his upcoming film Bachchhan Paandey. Arshad–along with the film’s other stars Akshay Kumar, Kriti Sanon, and Jacqueline Fernandez–attended a press conference to promote the film recently.

At the press conference, the actors were asked who they considered their godfather in the film industry. In response, Arshad said, “I don’t know how to explain that but I would say Mr B (Amitabh Bachchan) because I started my career with ABCL, if I could say that. Joy Augustine! These are the people who got me in this profession so I would say them but then they left me, abandoned me, so I don’t know what to call them, godfather or which term.” This response drew laughter from the other actors as well as the mediapersons present.