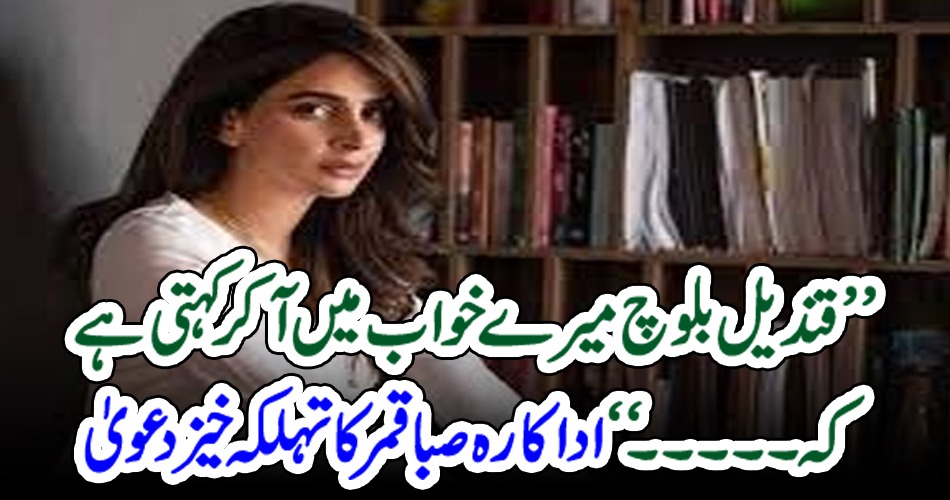 Karachi (News Desk) Actress Saba Qamar has said that Qandil Baloch used to come to me in my dreams and ask me to bring justice. Saba Qamar in a recent interview to British media in Talked about projects. Saba Qamar launches her web on Indian streaming website Z5

Talking about the series “Mr. and Mrs. Shamim” in which actor Noman Ijaz is playing the lead role with him, he said that the role of “Mr. Shamim” in the series was made to draw people’s attention to an important topic. And hopefully people will understand a little bit, a soft corner will be created for humanity. For the first time in the web series, Noman Ejaz is playing a different role from the roles he has been doing before. Saba Qamar said about Noman Ijaz’s character Mr. Shamim, Shamim is not an eunuch, but even then he is not normal for people. Shamim has a bit of a subtlety, like a woman who lives mostly or like a brother of four sisters, there must be some kind of character in your circle. There should be respect but in our society such people are discriminated against. Saba Qamar said that in this web series she is playing the role of a girl who falls in love with a handsome and masculine man but later she realizes that love is not reality but something else. Shamim teaches Omina (Saba Qamar) what love is. During the interview, Saba Qamar talked about her super hit project “Rebel” which was based on the life of social media star Qandil Baloch. I did it so heartily that I couldn’t do anything for a whole year after doing it. I went into depression. Saba Qamar said I probably never mentioned on any platform that if I slept at night then she (Qandil Baloch) would see me in a dream and I would wake up. How many times did I go to my mother and I said my mother, I have seen her. Then I did this project with a lot of heart. Actress Saba Qamar said that in the beginning when I took up the “Rebel” project, I was not so serious that it was a hit. But when it all started to happen to me, then I felt it was my responsibility to get it right.