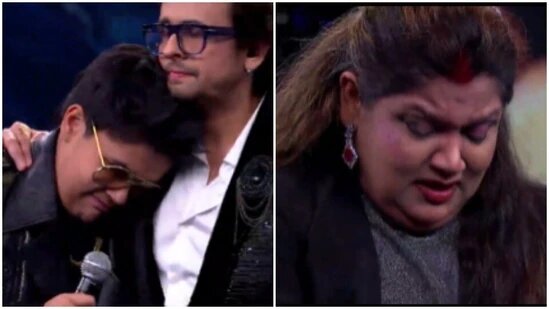 Bappi Lahiri, who composed songs for movies such as Disco Dancer, Himmatwala, among others, died at the age of 69 on February 15.

In a new video released from the Mirchi Music Awards that were held in Mumbai on March 8, Swastik Bansal can be seen performing the popular song. For the tribute, he was joined on the stage by his mother Rema Lahiri, Bappi’s daughter. Singer Sonu Nigam was also present on the stage.

Swastik started singing as a collage of pictures of the late singer-composer appeared on the screen on the stage. The clip showed Rema tearing up as she heard the song. Swastik also broke down towards the end of his performance and hugged singer Sonu Nigam. It was Sonu who completed the rest of the song as the audience members stood up to pay respect to Bappi.

Like Loading...
previousThree marriages failed !!! What funny thing did the fourth engaged actress say about her ex-husbands?
nextAneela Murtaza Files A Lawsuit Alleging That Sana Javed Is ‘Seeking Publicity’ At Her Expense
%d bloggers like this: