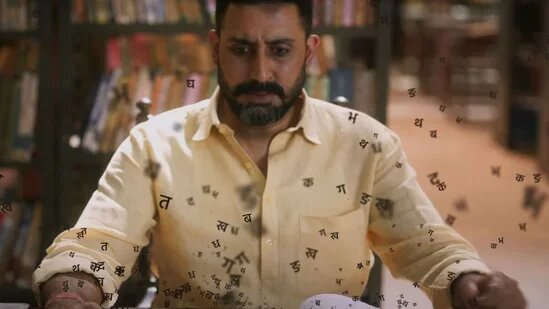 Abhishek Bachchan’s Dasvi trailer has the actor playing a jailed politician triggered by an IPS officer (Yami Gautam) to complete his education.

Abhishek Bachchan is back again, this time as a jailed politican Ganga Ram Chaudhary in Dasvi. The trailer of the film released on Wednesday and introduced us to all that happens in and outside the jail as he gets convicted in a corruption case. The film stars Nimrat Kaur as his wife Bimla Devi, an accidental Chief Minister, and Yami Gautam as an IPS officer. Also read: Abhishek Bachchan pens note, confesses being ‘border-line apologetic’ about his work: People call it lack of confidence

The trailer opens with ‘Jat politician’ Abhishek being sent to jail, but he refuses to lower his status of an axed chief minister. While he revolts in jail, his wife Bimla Devi (Nimrat Kaur) falls in love with her new position, that of a Chief Minister. The story seems to take an interesting turn as IPS officer (Yami Gautam) triggers Abhishek Bachchan by calling him an ‘anpadh gawaar (uneducated)’, leading him to decide to pursue his education during his time in jail.