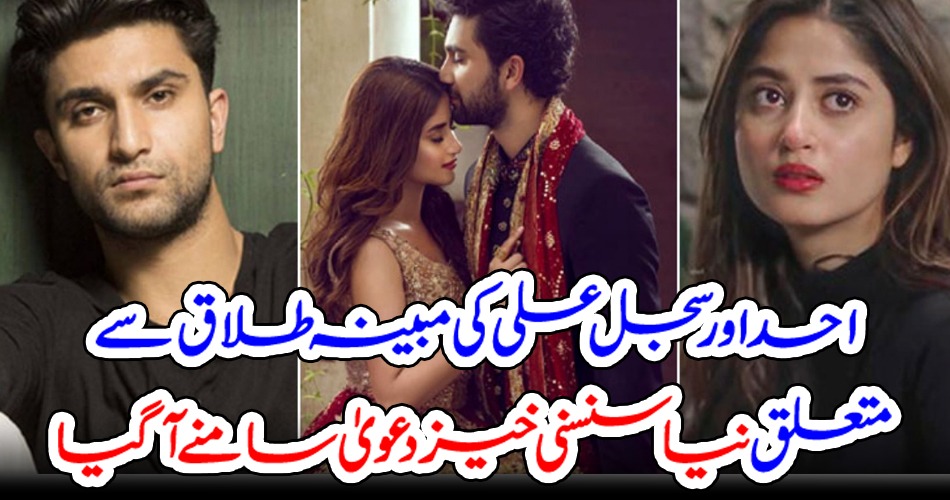 Lahore: (Web Desk) A new sensational claim regarding the alleged divorce of actor Ahad Raza Mir and actress Sajjal Ali of Pakistan Showbiz Industry has come to light. A video of digital creator Raja Matool is circulating on social media in which he is making some claims about the alleged affairs of Ahad Raza Mir saying that if Ahad speaks the truth then you will know the real reason for divorce. ۔

In this video, the digital creator says that showbiz personalities know what kind of person he is and how many affairs he has. If he tells this, then he has a chance to become a big man. He also expressed good wishes for Sajjal Ali, a well-known actress of Pakistan Showbiz Industry, has removed the name of her husband Ahad Raza Mir from her Instagram account. News of Sajjal and Uhud’s separation has been circulating on social media for a long time. These rumors have not been officially confirmed or denied by Uhud and Sajjal but now screenshots of the actress’ Instagram profile have gone viral on various social media platforms. Sajjal Ali’s reaction: In these screenshots, it can be easily seen that Sajjal Ali has removed the name of her husband, Ahad Raza Mir, attached to her name. While now he has removed the name of Ahad Raza Mir with his own name and made it ‘Sajjal Ali’ only. It is also worth mentioning here that Ahad Raza Mir did not attend the wedding of Sajjal Ali’s younger sister actress Saboor Ali. There has been a wave of concern among fans in this regard. One fan wrote that this should not have happened, Sajjal deserves happiness in his life, they are both made for each other. I am crying Other fans prayed for a better future for Sajjal and advised him to be happy.