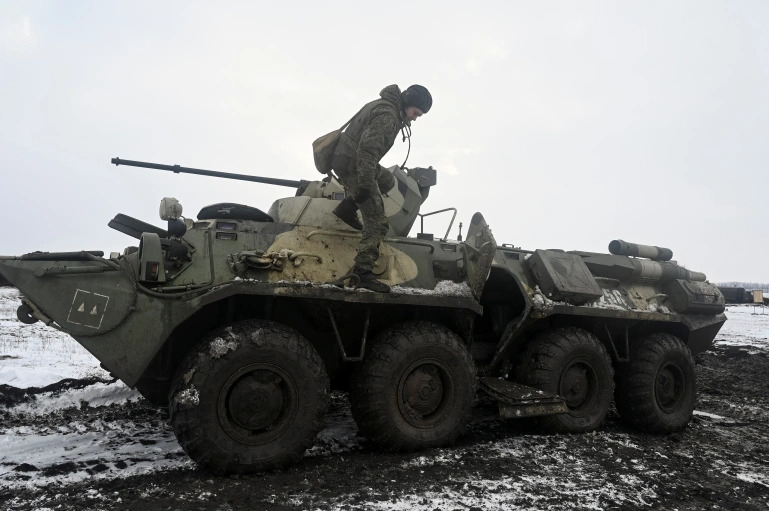 “It would appear that military installations have been the target [of the attack] – there have been missiles attacks and the number of casualties and level of damage is unclear at the moment,” Simmons said.

“But the whole sky was awash with red and orange when these missiles struck – some of which were apparently cruise missiles. And the main international airport did come under attack – it is not clear what the damage is there, but all air space is closed,” he added.

Zelenskyy declares martial law, says Ukraine will ‘win’
Ukraine’s president has made a brief national address to declare martial law throughout the country.

“Dear Ukrainian citizens, this morning President Putin announced a special military operation in Donbas. Russia conducted strikes on our military infrastructure and our border guards. There were blasts heard in many cities of Ukraine. We’re introducing martial law on the whole territory of our country,” Zelenskyy said in a video address.

“A minute ago I had a conversation with President Biden. The US have already started uniting international support. Today each of you should keep calm. Stay at home if you can. We are working. The army is working. The whole sector of defense and security is working,” he added.

“No panic. We are strong. We are ready for everything. We will win over everybody because we are Ukraine.”

Ukraine says troops attacked from Russia and Belarus
Russian troops attacked Ukraine from Belarus as well as Russia itself, with Belarusian support, at about 5 am local time (07:00 GMT), Ukraine’s border guard service says.

“We are hearing reports of the Russian military going in from various sides of Ukraine – from the east, from the west and now allegedly from the north in Belarus,” Jabbari said.

“It is clear now that this is not just a small military operation in the eastern region of Donbas as the president [Putin] had said,” she added.

“Many residents in Moscow yesterday were commemorating their version of Remembrance day. They said they could not possibly fathom the idea of going to war with Ukraine. [They said] Ukraine is their neighbor, is part of their family, they are brother and sisters and there is really no justification for launching a full-scale attack on Ukraine.”

Like Loading...
previousIf Salman and Shah Rukh weren’t actors … What did Madhuri answer? You will be amazed to know
nextAre Mawra Hocane & Ameer Gilani Planning To Get Married? Truth Is Finally Revealed
We use cookies on our website to give you the most relevant experience by remembering your preferences and repeat visits. By clicking “Accept All”, you consent to the use of ALL the cookies. However, you may visit "Cookie Settings" to provide a controlled consent.
Cookie SettingsAccept All
Manage consent