Lost sports of the Winter Olympics: Skijoring, the wild blend of horses and skis 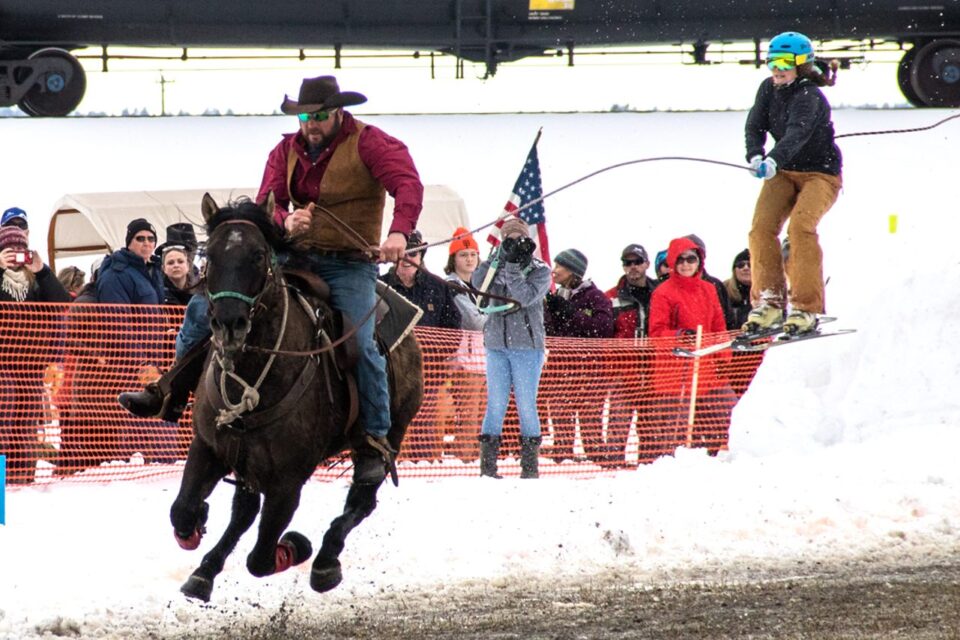 This Friday, a highly-anticipated winter sporting competition with a rich history will get underway — but it’s not the Winter Olympics in Beijing.

Over 6,000 miles away from the Chinese capital in Kamas, Utah, thousands will flock to High Star Ranch to watch skiers hurtle around a course of jumps, rings, and gates.
Some of these competitors will reach speeds of 40 miles an hour — an impressive feat given they are essentially racing on a flat course. Though these skiers have a trick up their sleeve — or, more accurately, a trick galloping at the other end of their rope.
Yeehaw! Don your cowboy hat and canter into the wild world of western-style skijoring — otherwise known as “Ben Hur on snow,”

Exhibited at St Moritz, Switzerland in 1928, skijoring holds the honor of being the first ever demonstration sport at a Winter Olympics, yet the discipline’s origins extend well beyond its Games debut.
Practiced differently across continents, the history of skijoring is a complex one. Fortunately, there exists a one-woman fountain of knowledge for all things skijoring in Loren Zhimanskova, President of SkijorUSA and Skijor International.
A key coordinator for American skijoring and central to the sport’s growing reputation in the region, Zhimanskova’s passion for skijoring is matched only by her seemingly endless knowledge of its history and its people.
Born in Europe, skijoring has taken many forms over the years. It began with skiers being pulled by reindeer in Lapland, before trying their hand behind horses, dogs and — popularized in the 1950s — behind motorcycles and cars.
Zhimanskova has even heard of skijorers being towed by airplanes, though she insists that riders let go before take-off.
St Moritz’s frozen lake — host to the glitzy annual White Turf event since 1907 — has been described as the sport’s spiritual home, but skijoring took a trip across the Atlantic not long after and has since blossomed into an ever-growing discipline in America.

To rider or not to rider?

The central difference to the European version of skijoring is that in the US, the horse has a rider.
While in Switzerland many competitors grow up on horse ranches and ski, in the US most are either very accomplished horsemen or very accomplished skiers.
For many American riders and skiers, the start line will be the first time they meet each other.
“They just put their talents together and give it their best shot — it’s fun that way,” Zhimanskova told CNN.
At White Turf, competitors will race twice around a full flat oval track — leaving gates at the same time — whereas the Western style sees skijorers navigate an obstacle course spotted with jumps, hoops to collect, and gates to pass through in a time-trial format.
White Turf has been described as the “playground of the rich and famous,” with sponsors ranging from BMW to Credit Suisse, and Zhimanskova finally realized her dream of experiencing the glamor first-hand in 2016.
“When I walked onto that frozen lake, I felt like this was hallowed ground,” Zhimanskova said.
“As a historian, I’m really here and I’m really going to see this. And it was every bit as spectacular as I had imagined.”
It also gave Zhimanskova the opportunity to share with locals how the sport was being done differently in the US.
Their reaction? “You’re crazy.”
“They had no idea how we were skijoring here,” Zhimanskova said.
“And I said, ‘Well that’s funny you say that because when I describe how you do skijoring in Switzerland … we think you’re crazy!’ So we had a good laugh.”

If White Turf is the Monaco Grand Prix of skijoring, does the US have a Super Bowl equivalent?
Despite some old events like Leadville, Colorado — a 73-year-old venue that sees competitors race through the town’s main street — the US does not have a showpiece event, yet this is by design.
The soul of American Skijoring is its sprawling diversity and uniqueness from venue to venue. Whilst White Turf takes place once a year across three Sundays in February, the US skijoring season runs from early January to mid March with venues spread from Calgary down the spine of the Rocky Mountains to Ridgeway.
Whilst racers can expect a broadly similar format in terms of track length and snow depth, all races are independently run — each sculpted to the desires of the organizers.
Some events, like Leadville, are run down a main street. Others take place on rodeo grounds or in a hay field.
All have different prize pots — ranging as high as $40,000 to a simple jackpot made up of registration fees. Some races will even reward the victorious skijorer with a horse or custom saddle.
Incorporating skijoring as the center-piece of a wider weekend festival — flushed with food and live music — is an increasingly popular trend, but two-day, standalone racing formats remain.
A new event in Canterbury Park, Minnesota offers a hugely popular freestyle event — showcasing skiers letting go of the ropes over jumps to do tricks in front of growing crowds of over 10,000. A newly emerged snowboarding division also continues to blossom.
“Everybody really does want to do it their way … I respect this, it is the nature of sport in the US to be supple,” Zhimanskova said.
“I think as a community we’re very united, it’s just that all of our events need to have their own local flavor.”

As such, Zhimanskova and SkijorUSA acts as the coordinating central hub of skijoring in the region.
Supported by Zhimanskova’s relentless efforts, skijoring in the US has enjoyed a golden age over the last decade. Some 23 races are slated for 2022, with two more potentially to come in Canada.
Despite skijoring’s US expansion and the swathes of new faces, the core community remains incredibly tight knit. For Zhimanskova, permanently on the road, this camaraderie lies at the heart of her love for the sport.
“When I travel, I don’t like to feel like a tourist,” Zhimanskova said.
“I like to integrate, I like to be able to hang out with people at the local bar and just chat about life in that town. Everybody’s having a great time and everybody’s helping each other, which is wonderful.
“Yes it’s a competition, but it’s that kind of rodeo cowboy culture where you need to have your buddy’s back because you never know when your horse trailer is gonna break down and you’re going to need somebody to help you.”
Joe Loveridge, competitor and organizer of Friday’s big event in Utah, could not agree more.
“I love the camaraderie, the adrenaline, and that anyone can do it,” Loveridge told CNN.
“There’s no better way to blend a ski town loaded with skiers and the western heritage and cowboy life.
“The sport brings together different types of folks and provides some high-paced action and also allows new and young people to participate.”
The Cowboy Channel will broadcast five skijoring races annually, and Zhimanskova is working towards a number of potentially high-profile sponsorships including Justin Boots and Cinch Jeans.
There’s even been interest in a reality TV show to potentially follow some of the sport’s eccentric personalities around the circuit.

Whilst Zhimanskova is doubtful that skijoring would ever be slated on the official Olympic schedule — citing reasons surrounding the Games’ complicated relationship with animals — she would be keen to reignite the demonstration tradition or incorporate it into the opening ceremony for a forthcoming Games.
Not least because 2028 marks the 100th anniversary of skijoring at the Olympics and there’s a prospect of Salt Lake City potentially being the host city for the 2030 or 2034 Games.
Picture the scene: a cowboy or cowgirl riding a horse into the opening ceremony bearing the American flag, followed in tow by a skier carrying the Olympic torch.
“I think it really represents the American spirit,” Zhimanskova said.
“The freedom, the love for the outdoors and the environment, the ability to come together from different backgrounds, different worlds and compete as a team.
“Of course, the horse is also just an iconic animal that’s been so important to our growth as a country.”